ZURICH and SINGAPORE, May 27, 2020 /PRNewswire/ — The Barry Callebaut Group, the world’s leading manufacturer of high-quality chocolate and cocoa products, has signed an agreement to acquire GKC Foods (Australia) Pty Ltd, a producer of chocolate, coatings and fillings, serving many consumer chocolate brands in Australia and New Zealand. 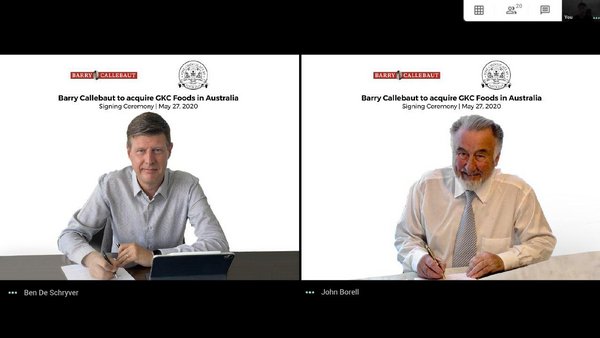 Ben De Schryver, President of Barry Callebaut Asia Pacific (left) signed an agreement with John Borell, Managing Director of GKC Foods (right), to acquire GKC Foods (Australia) Pty Ltd, a producer of chocolate, coatings and fillings, serving many consumer chocolate brands in Australia and New Zealand. The signing of the agreement held today in a virtual signing ceremony amid the coronavirus pandemic was witnessed online by companies’ employees in Singapore and Australia. 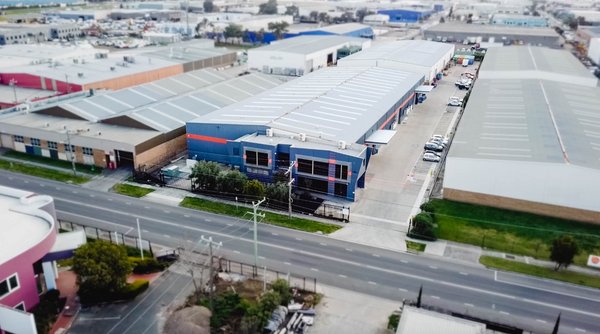 This strategic acquisition establishes Barry Callebaut’s direct presence and manufacturing capacity in the growing Australian market. The acquisition of GKC Foods empowers the Group to expand its position in the industrial chocolate market and to leverage its value-adding Gourmet & Specialties business in Australia and New Zealand. Barry Callebaut will continue to work with local distributors across Australia and New Zealand who have been importing and distributing its industrial and Gourmet chocolate and cocoa products to the country since the 1970s.

GKC Foods has been manufacturing "Made in Australia" chocolate and confectionery products since the 1980s. Today, the company produces a wide range of products including organic and vegan chocolate for dedicated chocolate shops, gourmet delis, specialty food outlets, and key national retailers. The company operates a chocolate factory and a warehouse in Melbourne.

Barry Callebaut’s investment involves upgrading and expanding the factory’s existing infrastructure; installing a new state-of-the-art chocolate production line, and the deployment of an integrated management system to enhance automated production. In addition, the company will employ around 50 people at the site, including GKC Foods’ existing employees, who will transfer to Barry Callebaut upon completion of the transaction.

Ben De Schryver, President of Barry Callebaut in Asia Pacific, said: "We strongly believe in the growth opportunities of the Australian and New Zealand chocolate confectionery markets. We already have the highest quality products today and we will further grow our competitive advantage through the acquisition of, and investment in, the best-in-class GKC Foods manufacturing facility in Australia."

John Borell, Managing Director of GKC Foods, added: "I am very proud of the great chocolate business we have built from scratch over the past 35 years. Our agreement with Barry Callebaut will ensure the successful future of GKC Foods and our team as part of a large, international, group. We really appreciate the business principles and the team spirit on which Barry Callebaut is based."

The transaction is subject to regulatory approval and other closing conditions. Expected completion is before the end of this calendar year. The parties have agreed not to disclose any financial details of the transaction.

Barry Callebaut is one of the largest chocolate and cocoa manufacturers in Asia Pacific. Employing more than 1,800 employees in the region, the company already operates 10 chocolate and cocoa factories in Asia, namely in China, Indonesia, Japan, Malaysia, and Singapore. In the last 12 months, the company has also expanded its sales operations in Indonesia and the Philippines, in addition to its existing sales offices in India, Japan, Malaysia, Singapore and Thailand. It recently announced the groundbreaking of a new chocolate factory in India which is expected to be ready in late-2020. Barry Callebaut’s Asia Pacific Headquarters are in Singapore.

All photos on this announcement can be found on Barry Callebaut Asia Pacific’s Flickr photo album: bit.ly/BCinAustralia. This press release can also be found on PR Newswire and on our corporate website: bit.ly/BCacquiresGKC.

About Barry Callebaut Group (www.barry-callebaut.com):
With annual sales of about CHF 7.3 billion (EUR 6.5 billion / USD 7.4 billion) in fiscal year 2018/19, the Zurich-based Barry Callebaut Group is the world’s leading manufacturer of high-quality chocolate and cocoa products – from sourcing and processing cocoa beans to producing the finest chocolates, including chocolate fillings, decorations and compounds. The Group runs more than 60 production facilities worldwide and employs a diverse and dedicated global workforce of more than 12,000 people.

The Barry Callebaut Group serves the entire food industry, from industrial food manufacturers to artisanal and professional users of chocolate, such as chocolatiers, pastry chefs, bakers, hotels, restaurants or caterers. The two global brands catering to the specific needs of these Gourmet customers are Callebaut® and Cacao Barry®.

The Barry Callebaut Group is committed to make sustainable chocolate the norm by 2025 to help ensure future supplies of cocoa and improve farmer livelihoods. It supports the Cocoa Horizons Foundation in its goal to shape a sustainable cocoa and chocolate future.