TOKYO, June 5, 2020 /PRNewswire/ — KLab Inc., a leader in online mobile games, announced that its hit 3D action game "Bleach: Brave Souls" will be released in Hong Kong, Macau, Taiwan, South Korea, other Asian regions. Asia World (All Asia: AA) will be added to the game and it will be playable in English, Traditional Chinese, Simplified Chinese, Korean, and Thai.

"Bleach: Brave Souls" is a long-selling title with over 47 million downloads that has been released in more than 130 countries and regions around the world*, and is set to celebrate its 5th anniversary on Thursday, July 23, 2020.

The new release for Asian regions is scheduled for the summer of 2020. Pre-registration will begin on Friday, June 5th, prior to release. 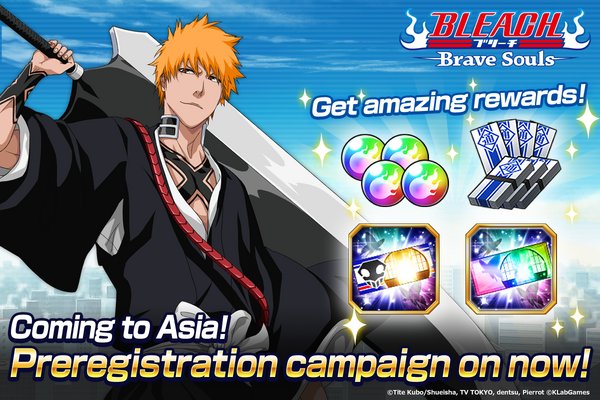 To coincide with the start of pre-registration, new official Facebook pages in English (for AA), Traditional Chinese, Simplified Chinese, Korean, and Thai have been created for players in the Asian regions. In addition, a special pre-registration campaign will be held in which players from all servers can be rewarded with fantastic prizes.

The popular manga and anime Bleach is now a full-scale action RPG!

Hack and slash your way through exciting 3D battles with one or more players. Run through the game with easy controls and enjoy exhilarating battle scenes as you defeat your opponents with powerful moves.

Story Mode allows players to relive the most memorable scenes from the world of Bleach.

Sub Stories are where players can enjoy stories that are not from the original story.

Test your team against other players in weekly ranking battles. Battle your way to reach the top of the League. There are 11 Leagues in total: 8 Seat Officer leagues, Lieutenant, Captain, and Head Captain leagues. Battles happen every week. Players can be promoted or relegated to a higher or lower league for the following week based on League Rankings.

Combine with up to three other players in Co-Op Quests. Work together with your teammates using the chat phrase function and crush your enemies.

Epic Raids are multiplayer quests where up to six players work together to defeat an extremely strong boss using only one character each. Collect Raid Medals by clearing raids and exchange them for Spirits which can be used to power up your Familiars. Familiars are pets that can accompany characters on quests.

New Official Facebook pages have been created in Traditional Chinese, Simplified Chinese, Korean and Thai. Check it out for the latest "Bleach: Brave Souls" information for players in the Asian region in each language.

Work Together with Everyone in the World to Unleash Ichigo’s Bankai! Pre-Registration Campaign Site Now Open!

The hit 3D action game "Bleach: Brave Souls" played by 47 million people all over the world will be released in Asian regions this summer. To commemorate this, the new pre-registration campaign site has been created.

Ichigo’s Bankai meter will increase on the special campaign site according to the number of new followers and likes on the official social media. If Ichigo can achieve his Bankai, all players will get a 5 Summons Ticket, up to 150 Spirit Orbs, and more when the game releases.

Campaign Period: From Friday, June 5 until the game releases

Work together to help Ichigo unleash his Bankai! If he succeeds everyone gets rewards.

A new "Bleach: Brave Souls" Corner will be added to the "KLab Games Station" Mandarin Chinese, Cantonese, and Thai language versions. The "Bleach: Brave Souls" Corner is scheduled to preview information and gameplay for fans in the Asian region before the official release. The latest information will be shared in each language so be sure to check it out!

Launched in October 2016, KLab Games Station was created to showcase KLab’s globally-released games in an effort to create new avenues of communication with its global gaming community. Hosted by members of KLab, the show delivers the latest gaming news, updates, and live gameplay to viewers.

This project is based on Bleach, a popular Japanese manga featured in Shueisha’s landmark comic anthology, Weekly Shonen Jump, until issue #38 of 2016. The series premiered in 2001, quickly gaining a dedicated fan base and selling a total of over 120 million copies of the 74-volume manga series. Bleach has become a powerful media franchise, spawning an animated television series that ran from 2004 to March 2012, and a total of four feature-length films that have been released in theaters to date. In addition, 2020 marks the 20th anniversary of the serialization, and the "BLEACH 20th Anniversary Project" is currently underway. The series’ popularity extends beyond Japan, to an international audience, where it continues to find new fans and dedicated followers around the world.