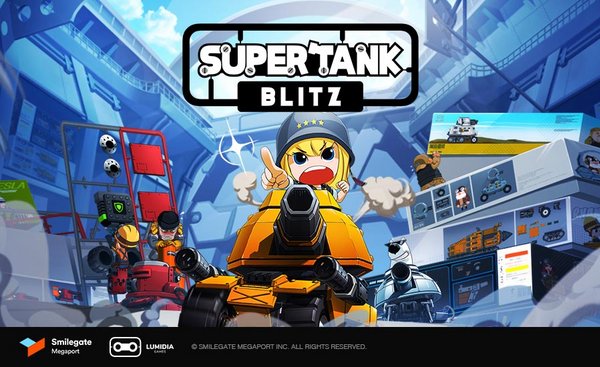 SUPERTANK BLITZ is the sequel to mobile sandbox game "Super Tank Rumble," which was released by Smilegate in 2017 and recorded over 20 million downloads worldwide. Chosen by Google as the most innovative game of 2017, "Super Tank Rumble" has been recognized for its original game quality.

The larger framework of the series where various parts are combined to build your very own tank and compete with other players has been maintained, while new elements have been added to character collection and emphasis has been placed on battle content for more casual enjoyment. Furthermore, the entire UI (user interface) of the Tank Assembly page has been dramatically improved, and parts organization has been simplified to enjoy more intuitive tank assembly.

The addition of character elements is the most notable change to the sequel. Users can collect and build a variety of characters through real-time battles. As the character grows, more parts are made available to create an original, powerful tank. Each character has its own distinctive tank, and the tank is provided when a new character is collected, providing a foundation for easy assembly of tanks of a wide variety.

Meanwhile, user response has been positive to the soft launch initiated ahead of global pre-registration by Smilegate on the 19th in six countries, Canada, Singapore, Australia, New Zealand, Sweden, and The Netherlands.

Smilegate Megaport CEO Ina Jang said, "Smilegate will continue to break new ground and develop the unconventional genre of ‘casual sandbox’ through SUPERTANK BLITZ," and that "we ask for your support as Smilegate aims for gamers all over the world who love games to be exposed to more diverse genres of games in order to further develop the game ecosystem in a positive direction."

Pre-registration for SUPERTANK BLITZ is available at the official pre-registration website (https://supertankblitz.smilegatemegaport.com/evt/202005_preregist).