The fight between Manny Pacquiao and Keith Thurman was one of the anticipated boxing matches of the year, with the veteran fighter Manny going against the undefeated Thurman. The match ended with Manny winning due to a split decision, which made every Filipino proud.

The event was held in the MGM Grand Garden Arena on July 20, 2019 (July 21, 2019 in the Philippines) and lots of celebrities were present to support The People’s Champion. Among them were Catriona Gray, who won Miss Universe 2018, and Chavit Singson, long time supporter of Manny.

Before the match there were live cameras open in both of the boxers’ waiting room. It is to show any activity between the boxers and the people around them before the fight. Most of it were just purely in preparation for the main event, but there was one particular scene that became viral.

From a post in Twitter, the clip shows of Catriona Gray, wearing her bright pink attire, and she was seated while she was using her phone. Chavit Singson, meanwhile, was sitting beside her.

It then looked like Chavit was slowly falling asleep, and his head was slowly dropping to the side, to were Catriona’s shoulder was. The beauty queen saw his head slowly drop, and then Chavit suddenly sat straight up, looking like he was trying to wake himself up.

Netizens were quick to pick up on this video clip. Some had called Chavit a “Hokage,” which is derived from the anime “Naruto,” which in turn was derived from the “ninja moves” slang, which means a quick movement that no one should notice.

We’ll never know what happened on that moment, but at least we know that Catriona won’t allow any “ninja moves” get to her any time soon.

Also read: Manny Pacquiao vs. Keith Thurman Fight: What You Might Expect When They Meet in the Ring 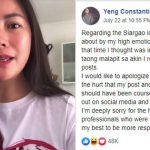