Couples especially married ones tend to hide money from their partners, it is very common but when the jig is up, it can raise trust issues. You may not be doing for a wrong reason, but be sure for confrontations when your significant other finds out. Nevertheless, if you are going to stash some cash away, a vase might not be a good idea, for obvious reasons.

Hiding money from your partner, regardless of the reasons, will always have a bad ending. In some cases, the money gets wasted when the person passes away without revealing its whereabouts.

This phenomenon is called financial cheating, and though many people do it, perhaps it is best not to do it for long periods of time.

A good example of financial cheating is this couple in China, whose daughter accidentally broke the family vase in the living room only to discover her dad’s secret savings of thirteen years.

According to the Chinese local news, this incident happened to a family in Guangxi recently and as expected the mother didn’t take it lightly that her husband has been hiding money from her for a long time.

The daughter was doing her morning routine stretch when she broke the vase in the living room. Her mother, who has just woken up, was still in the bedroom.

As told by The China Press, the mother was first upset that an item that has been decorating her living room for ages is now broken. But she got even more furious when she found out that ornamental vase has been her husband’s piggy bank, without her knowledge.

“I was sitting on my bed and suddenly, I heard a loud crashing sound coming from the living room. I hurriedly jumped out of the bed and headed to the living room to see what was going on, and I was shocked to see the broken vase with a lot of money scattered around.

”I texted my husband and asked him to come back home. He was stunned when he stepped in the living room.”

The woman added that the hidden money was around 5,000 Yuan (RM 3,000). The husband has been saving the money for thirteen years since they bought the house back in 2006.

“I saved this money from eating bihun. I don’t know what to feel now.”

After getting caught, the man came clean to his wife and apologized, making his wife less furious. He got off the hook but did not escape his wife’s banter. “For more than ten years and he only saved a few thousand Yuan, that’s hilarious!” The wife joked.

It is a good thing the couple didn’t end up getting into a huge fight and break more stuff and reveal more ‘discoveries’, maybe the little girl’s savings – for college perhaps! 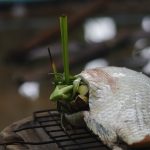