SEOUL, South Korea, June 9, 2020 /PRNewswire/ — On the 9th, DRX (CEO Sang-in Choi), an eSports company, announced that it is entering into a partnership with Kakao (Co-CEO Min-soo Yeo, Soo-yong Cho) by starting various campaigns and using the Kakao Friends IP as the main sponsor. 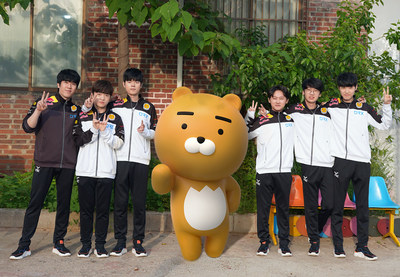 DRX, an eSports company, announced that it is entering into a partnership with Kakao(KRX: 035720)

The partnership was signed between DRX and Kakao(KRX: 035720)  in anticipation of a new viral synergy for national and international eSports fans. In particular, Kakao believes that DRX’s large global fandom, strong challenge spirit, and growth potential are suitable to express the dynamic vitality and liveness of Kakao Friends, which has established itself as a K-wave character in the overseas market.

DRX is a professional eSports company that operates DRX, the wildly popular League of Legends pro game team. It has a global fandom large enough to be listed on top 3 of the average global viewership among the League of Legends teams across the world, including North America, Europe and China. DRX has DRX Deft, a globally well-known ADC, and the next-generation rookie, DRX Chovy, who succeeds Faker’s legacy.

Kakao’s Kakao Friends consists of eight characters: Ryan, Apeach, Con, Muzi, Tube, Frodo, Neo, and Jay-G. Based on an interesting universe and entertaining canon, Kakao Friends transcends its on/offline merchandise and produces videos, platforms, and services which are loved by both national and international fans.

Through the partnership DRX and Kakao Friends will launch a joint global marketing campaign. Kakao Friends’ character ‘Ryan’ will be shown on DRX’s uniform, and fans can meet Kakao Friends in DRX’s various content channels such as individual players’ streams and on team merchandise.

The campaign will not just stop at a character marketing level but aim to extend and create a new cultural trend. It is expected to present a unique push to fans as it plans to produce various original collaborative content that the eSports industry nor Kakao has ever seen.

According to the CEO of DRX, Sang-in Choi, "We will provide an opportunity to create a new K-wave with Kakao Friends, which has infinite potential value." He also added "(this partnership) will further cultivate the eSports ecosystem." DRX has previously signed a sponsorship agreement with McLaren, the world’s leading supercar brand. DRX is the only eSports team to be sponsored by McLaren in Korea. In addition, DRX has entered into partnerships with about 10 various companies and brands, such as Red Bull (an energy drink company), HyperX, Logitech, and Xenics (gaming equipment producers), ETAC (clothing company), and Upcle (media company). The rebranding done last November as DRX is considered to be a success since the team has attracted over 8 times more sponsorship revenue compared to last year.

DRX is an eSports organization and runs a professional League of Legends team. It has a strong global fandom, which helped DRX reach 270k average viewers in this spring season and 3rd place in global viewership across all League teams. DRX has developed a proprietary method of quantitative and qualitative metrics analysis upon which it will build a structured team training system. Since it also has a deep roster with one leading team along 3 academy teams and a continuous stream of great talent, DRX anticipates a better future to come. Just like the team slogan "Enjoy Challenge", DRX makes savoring challenges its motto.