Seven Facts you should know about Tennis Superstar Naomi Osaka

Naomi Osaka was unknown before the September 2018 U.S. Open. She made sure everyone knew her after the tournament by defeating the 23-time Grand Slam champion Serena Williams in the final.

That was not the only time Osaka defeated household names in tennis sports, as she also defeated Angelique Kerber, Maria Sharapova, and Simona Halep.

Here is what you should know about the 21-year-old world number one tennis player. Keep reading for some fun nuggets about Osaka.

She has faced Serena Williams two times, winning both encounters

Osaka first played against Serena Williams at the Miami Masters in March 2018, winning the match 6-3, and 6-2 according to a report in The Telegraph. Although many people didn’t give Osaka enough credit for winning the match, especially because it was right after Serena has returned from maternity leave, Osaka silenced her critics in the US Open by again defeating Serena.

Similarities with her Idol Serena

Naomi’s tennis career has several similarities to that of her childhood idol Serena. They both have professional tennis player sisters; they were both coached by their respective fathers during the beginning of their careers, they both worked with Sascha Bajin, and just as Serena, she is also dominant than her older sister.

During a press conference, Osaka was asked by a reporter what her goals were and she wittingly responded: “to be the very best that no one ever was.” Realizing nobody got a hand of the joke, she explained, “That’s a Pokemon quote, I’m sorry. That’s the Pokemon theme song.”

Naomi is half-Haitian half-Japanese. However, she can’t speak Japanese but understands the language. At the Australian Open, her coach asked questions in English and the Japanese. Amazed, she asked: “English only?”

She has a powerful serve

During the 2016 US Open, she recorded a smashing speed of 125mph. She is also known for her phenomenal forehand at 100 mph.

She has a good dressing style on and off the Court

On the court, Naomi always wears her signature stylish tennis gear including a tank combos and a colorful skirt. Outside the court, she similarly serves up a sartorial desire.

Her sister is also a professional tennis player

Mari Osaka, her older sister, started playing professional tennis in 2014, a year ahead of Naomi. They are also playing doubles and could potentially follow the footsteps of Serena and Venus Williams. 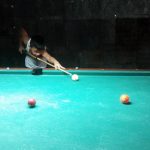