Is Fil-Am Francisco Martin the next American Idol?

The superb talent of a Filipino-American named Francisco Martin from San Francisco, California has stunned American Idol judges along with millions of fans across the globe.

In fact, the judges tagged his audition piece as “a winner.”

The audition of Martin was shown during the premiere episode of the 18th season of the show which was aired on Feb. 17 (Philippine Time).

With Martin’s rendition of the song “Alaska” by Maggie Rogers, the judges Katy Perry, Lionel Richie, as well as Luke Bryan were obviously amazed.

Perry was captivated with his performance that he told Martin that he is a “Top 10 material.” The two other judges, in the meantime, quipped that he should be on the “Top 5.”

Eventually, Luke Bryan showed a piece of paper with the word “winner” on it, after Perry told him to do so.

It was obvious during the audition that the Fil-Am singer, who is taking up a pre-law course, was nervous. In fact, during his audition interview, he admitted that he have always struggled with his self-confidence, though he said he wanted music to be his career as he loves music.

In order to calm him down prior to singing his audition piece, Richie and Bryan hugged him.

Towards the end of the audition, Richie said he’s so happy to see Martin “sweat.”

Additionally, Perry asked him if the singer can write his own songs. The singer said yes, prompting judges to ask him to give a sample of his own composition.

Again, it seemed that the three judges agreed that he has the potential to become a “winner.”

At the end of the audition, the judges simultaneously gave their votes and declared that Martin is going to Hollywood. Martin was given the golden ticket pass to the show.

If you wish to check out Francisco Martin’s audition, you may want to check out this video and let us know what you think:

Also read: LEAKED: Marcelito Pomoy performed Beauty and the Beast at the Finals of America’s Got Talent: The Champions 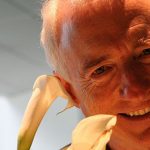