Put out fires and save lives…or have a laugh trying

LONDON, May 25, 2020 /PRNewswire/ — Curve Digital and Muse Games are excited to announce that frantic, frenetic, firefighting multiplayer Embr launches on Early Access for Steam and Google Stadia May 21st. 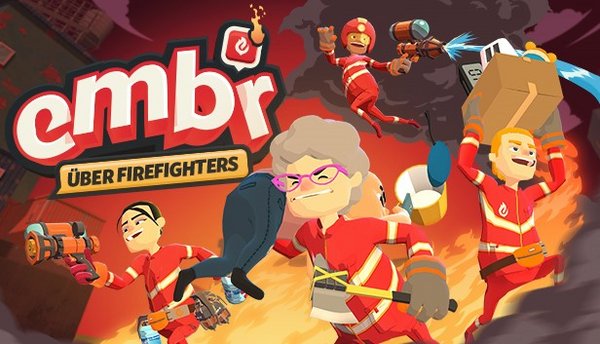 Developed by Muse Games – the studio behind the award-winning Guns of Icarus Online – Embr is a fantastically fictional look at a world where the gig economy rules the roost and the general public now stand ready, phones in hand, to respond to firefighting emergencies.

Players will either play solo or work together in online teams tackling blaze after blaze to earn tips from clients, picking up the ever-so-crucial 5-star rating in order to earn cash, upgrade tools, and hopefully becoming the ultimate ‘have-a-go hero’ firefighter.

This is no like-for-like simulator, however. Embr is an intentionally satirical, tongue-in-cheek look at the rise of venture capitalism, with its license for allowing players to solve problems creatively resulting in toss-the-resident-out-of-the-window-onto-a-trampoline style solutions that just wouldn’t fly with a real fire fighting force.

"With Embr, we set out to shine a satirical light on the gig-economy – not in terms of the people making those deliveries and driving those taxis, but rather the companies at the top powering this particular brand of venture capitalism and deregulation," says Howard Tsao, Team Lead at Muse Games. "On a gameplay basis, we also wanted to see just what mayhem would occur if the untrained masses headed out with a hose and tried to put out fires in the same way people deliver take-out or drive people around in makeshift taxis. The end result is just as fun and frenetic as we thought it would be. It just makes you appreciate what a difficult and almost impossible job real-life firefighters do."

Embr offers players a variety of missions to earn money and upgrade their firefighting tools and lease better vehicles and fire trucks, all while dealing with competition from the Canadian firefighting startup Hosr. Staying competitive, however, relies on players working together, planning firefighting and rescuing in dense environments with complex systems interactions; water, fire, gas, electricity, and structure integrity all have a role to play.

Curve Digital is also proud to announce that Embr will be brought to life by CORSAIR iCUE software on PC. The room will be lit up as players fight fires, scale buildings, and rescue people from danger. When certain events are triggered in-game, the dynamic RGB lighting on CORSAIR iCUE-compatible components and peripherals will change to compliment the action in play.

Embr launches on Steam Early Access on May 21st for $19.99/€19.99/£17.99 with a 20% discount in launch week. Players can expect multiple free major content drops in the months after launch significantly expanding the game. Muse Games will also continue to diligently work with the community to further shape the Embr experience based on feedback and suggestions.

For media enquiries in Europe:

For media enquiries in North America:

We’re Muse Games, an independent game development studio in NYC. We focus on boundary-pushing co-op gameplay and AI, with the aim of bringing people closer together through games. We are the team behind the award-winning and best-selling Guns of Icarus series on Steam and PS4 that features team-based multiplayer airship combat set in a post-apocalyptic, steam/dieselpunk-inspired world. Other projects include the award-winning and App Store top-selling Hamsterdam and CreaVures. Our upcoming project is the irreverent, frantic, co-op, firefighting (un)simulator Embr, where you get to save lives and get paid in a hyper-capitalist alt-present, where firefighting funding has run dry, and venture capitalism and e-hailing rule the roost.

Curve Digital is a leading publisher of video games on both PC and consoles. Since 2013, Curve Digital has been working with the world’s best game developers to help bring their games to broad global audiences; from renowned indie hits like Autonauts to the likes of the multi-million-selling Human: Fall Flat. In recent years Curve Digital has become industry recognised, winning ‘Indie Games Publisher of the Year’ at both MCV Awards 2018 and 2019, as well as ‘Publishing Star’ at the Develop: Star Awards 2019 and ‘Best Publisher Award’ at the TIGA Awards 2019.