SHENZHEN, China, May 29, 2020 /PRNewswire/ — Nayuki Cupseum is back for the third season on May 20, bringing a new series of cups that feature "Big Hugs" designed by Christopher David Ryan, the graphic designer and illustrator also known as "CDR". The new designs were commissioned to celebrate the symbolic date ‘5/20’ in China, which has been embraced by the Chinese to represent love and romance. 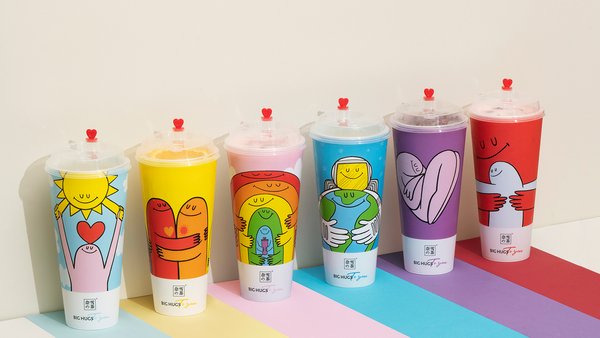 Each colorful cup symbolizes emotions like love, hope and passion that have always inspired and guided us: a hug to sunshine allowing us to drench in the bliss of nature; a self-hug that awakens our natural abilities to heal; a loving hug that helps others unleash the power to overcome setbacks. Painted with vibrant colors, the character Bug Hug is a beautiful reminder of the joy and kindness of this world.

Christopher David Ryan has worked for Victoria Secret, Nike and Google which all featured variations of his Big Hug with its naïve and charming smile. CDR captures the essence of love in a witty and captivating manner through the minimalist illustrations filled with enchanting concepts about hugs. Together with CDR, Nayuki hopes to usher in a new season with a purity of design that celebrates all positive emotions for love, so that customers can also enjoy the healing power of a cup of tea.

"It was a pleasure for us to work with Christopher David Ryan to create new cup designs for the Nayuki Cupseum project. In this season, we wish our cups to share messages of warmth, positivity, friendship, community, universal love and self-esteem by putting these ideas in the hands of the people to brighten their day," said Peng Xin, Founder of Nayuki.

"On this special day, we celebrate this powerful and universal passion that connects people from all around the world with our new designs. A hug can be more than wrapping your arms around that someone special and the warmth of the sun on your face or positive thought during a difficult time," Peng Xin added.

Nayuki Cupseum has been working with global artists to create gallery experience on the cups. The first Cupseum design featuring "Being A Cat" met the customers In August 2019, as a result of the partnership with Japanese illustrator Pepe Shimada. For the 2020 Lunar New Year series rolled out earlier this year, artist Cinyee Chiu takes inspiration from Chinese mythological creatures to infuse the tea culture with the essence of Eastern arts.

Nayuki Cupseum aims to invite graphic artists and illustrators from all over the world to use their innovative designs to express the emotions and daily lives in the urban setting. Every cup is also a canvas on which customers can explore their creativity and transform every drink into a work of art. With the Japanese store in Osaka scheduled to open on July 4 and a new store soon to meet American customers later this year, Nayuki wishes to bring global artists closer to global tea lovers.

Nayuki, the leading Chinese new-style tea brand, with its fruit-based cheese teas and soft-euro bakes, is dedicated to bringing new taste sensations to tea aficionados around the world. Growing rapidly with nearly 400 stores ranging from 1,200 up to 11,000 square feet in prime locations across China, Nayuki has elevated the tea-drinking lifestyle to the next level with its innovations.