Phone enthusiasts always wait for news of the latest models that their favorite brands would produce. Those that prefer Android would wait for news from different companies like Samsung, Huawei, or Xiaomi, while those that favor iPhones and the iOS system would always wait near the end of the year for news.

This year, it is expected that there will be a reveal for the latest iPhone model this September. From an article posted by Bloomberg, three new models are expected to be revealed and would likely go on sale this September.

These new phones would be the “Pro” iPhones and will follow the previously launched iPhone XS, XS Max, and the iPhone XR. Through a leaked document which came from a Tweet by @AppleBeta2019, it appears that the new models will be called iPhone 11, iPhone 11 Pro, and iPhone 11 Pro Max.

It was also mentioned that the new “Pro” iPhones are expected to have a third sensor with their camera which can be used to take ultra-wide angle photos and videos. They may also have new features in regards to users being able to retouch and edit photos straight from their phone.

The iPhones are also said to have a “reverse wireless charging,” which means you can use it to recharge your AirPods as long as you are using a wireless-charging case with it.

The sensors for the Face ID has been improved upon, and the water resistance of the new models have been upped compared to older models.

Along with the new iPhones, they will also be releasing improved iPads and iPad Pros, giving it a similar treatment to the iPhones, and they are also planning on releasing a 16-inch Macbook Pro, which will be their laptop with the largest screen since the 17-inch Macbook Pro that they had until 2012.

These are still speculations, but if Apple is to continue their trend every year, expect to hear announcements from them very soon.

Also read: Huawei Mate 30 Series to be Revealed on September 19 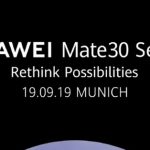