Manila Mayor Isko Moreno has bared his plans to expand Arroceros Park and transform the country’s capital into a green city.

In a report by ABS-CBN News, Moreno told environmentalists who have been lobbying for the park’s preservation his plan to extend the city’s last forested area.

“I will withdraw a portion of Arroceros street for public use, then we will extend Arroceros Park. We are going to create an esplanade at the back of Arroceros. You will see the pilot of a green city in Lawton,” Moreno said.

Moreno added that he plans to close some streets at the corner of the Quezon footbridge to have more space that can be converted into green space and to address the traffic problem near Lawton. He added that gates that enclose the park would be demolished.

“I’ve always believed in an open park. Ang park hindi naka-preso. I hope before the end of the year, 50 to 60 percent of the entire plan will be in place,” Moreno added.

Moreno said that he wanted a open park in Manila for Manilenos who wanted to visit park.

“The solution is not to gate it but to out security and enough people to maintain and sustain the purpose of the park,” he added.

It will be recalled that past Manila administrations sought to cut off trees from a portion of the 2.2-hectare forest park.

Moreno said he has rejected proposals for the construction of the gym, but did not agree to the demolition of the Department of Education office in the Arroceros compound.

Winner Foundation, the group that has been caring for the Arroceros Park for decades, said they are really happy with the new mayor and his vision. 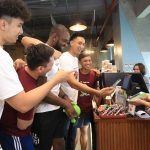