Bangkok, Thailand — With the advancement in photo editing technology, it is hard to convince someone of paranormal and supernatural creatures caught on camera without hem questioning the work of Photoshop. Nevertheless, there are those who will believe them, albeit having encounter or experience the ghostly activities themselves.

A certain man named Kantatee Pumnkon from Thailand recently shared some creepy photos he claimed were caught in his apartment. The photos appear to show a young woman with long hair and white shirt hanging on a thread and according to the man, it happened in his house.

A closer look of the photos, the lady can be seen actually floating on air without anything supporting her lifeless body, with face dropped.

While many people enjoy reading creepy stories and watching scary movies and videos, not many are brave as there are also a number of faint-hearted who would freak their life out in the sight of mystic things.

According to stories, a schoolgirl hanged herself in the building leading to many believing that she roams the place.

But after moving close and the ‘ghost’ not disappearing or showing any form of movements, Kantatee realized that it was actually pieces of clothes hanged bizarrely on the wireline.

In fact, dissecting the photo carefully, one can easily notice that ‘ghost’ is made up of a short dress, a long pair of pants, a long dress, and a white short-sleeve shirt.

“Damn… I thought it was a ghost! Who told you to hang clothes like this?”

People online found the humor part of this, with many tagging their friends and challenging them to also hang their clothes similarly, while others stated how they would have reacted if they encountered such a thing.

Recently, writer Adam Ellis has been detailing the ghost haunting his apartment for months now, with each development leaving netizens with their blood running cold.

Have you ever seen a creepy optical illusion like this before? Share it with us in the comments! 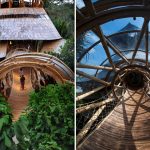 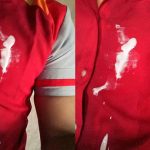