New smartphone models are being released often and most of them are trying to compete with the big names for phones. Oppo is one of them, as they always try to release new phone models that perform well and at the same time, can perform like a high-end model.

Oppo will be releasing their new Reno 2 model soon in the Philippines, and they’ll be following up with their latest flagship model, the Reno Ace. Along with that, they’ll also be releasing a limited-edition Reno Ace Gundam Edition.

The themed version takes the RX-78-2 Gundam as an inspiration, with its white case, the face of the Gundam at the back, and the E.F.S.F logo as well. The marking “Gundam RX-78-2” is also printed at the back. Its packaging is also themed after the iconic mecha and it comes with its own case. The case as well is themed after the Gundam’s shield.

The specifications of the Reno Ace Gundam Edition is the same as the standard model with a Snapdragon 855+ processor and four camera lenses. The front-facing camera has 16 megapixels and is in a small notch at the top of the 6.5 inch screen.It also has an 8GB RAM and 256GB of internal storage.

The Reno Ace Gundam Edition with will be released on November 11 in China for 3,599 Chinese Yuan (or for almost P27,000). No word yet if the model will be available outside of China but it was said that only 30,000 units will be made. 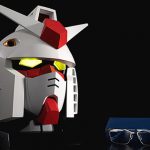