Manila, Philippines — Aces and Queens and Kagandang Flores, two of the best pageant camps in the country, will join together to help Miss Universe Philippines 2019 Gazini Ganados for her quest for a back-to-back title for the Philippines.

In a report by ABS-CBN News, former pageant mentor Jonas Gaffud, which is now a creative consultant of Miss Universe Philippines Organization, revealed their plans for Ganados.

“Well actually we talked about what will happen. We are going to collaborate with her mentors, of course, Kagandahang Flores,” Gaffud said.

“With their support, we’re giving our best for her — from styling, the best hair, everything at best because she is our Miss Universe Philippines,” he added.

“Now we’re supporting her in everything that she does. She has upcoming photoshoots that we want to provide the best styling, the best makeup, the best hair. Everything should be given to her on a silver platter. She’s Miss Universe Philippines,” he continued.

Just like other Filipinos, Gaffud also hopes for a back-to-back win for the Philippines in the most prestigious beauty pageant.

“I hope so. There’s so much pressure pero we can do it,” he said.

Gaffud added that Ganados has “a very strong stage presence.” “It’s very important in Miss Universe and any other pageant,” he said.

Although she knew that she has big shoes to fill, Ganados assured members of the media that her Miss Universe game plan is something to look forward to.

However, she refused to elaborate what’s her battle plan.

“That would be a secret for now, for you to look forward to it. I’ll just best represent the Philippines authentically in my own ways,” Ganados said.

Ganados also reacted on rumors that the upcoming Miss Universe pageant will be held once again in Manila.

“There were a lot of rumors of where the venue will be, but as of now, there is no exact location yet. Not unless the organization announces,” she said. 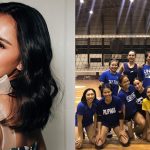