LOS ANGELES, June 9, 2020 /PRNewswire/ — GreenPlax®, the latest green technology innovated by CCILU Footwear, marks its formal debut in Autumn 2020 season, embodying the brand’s visions of sustainability and circular economy, through the development of the recycling/upcycling ecosystem for footwear industry. The result of the five-year endeavor by CCILU’s R&D team, GreenPlax® – in its first iteration – upcycles ocean plastics and turns it into high-performance material for every major component of the footwear (upper, insole, and outsole). This revolutionary technology was just honored by A’Design Award & Competition in footwear category of the year 2020. CCILU’s first footwear product application of GreenPlax® technology, "Renee" sneaker, also brings back CCILU’s signature SKIVE-ON® technology, which received the top honor from A’Design Award and Competition in the year 2017. With the SKIVE-ON® technology, 100+ completely independent and highly resilient GreenPlax® dots come together and form the extremely lightweight and flexible outsole which offers the best comfort and the ultimate bare-foot experience to consumers. 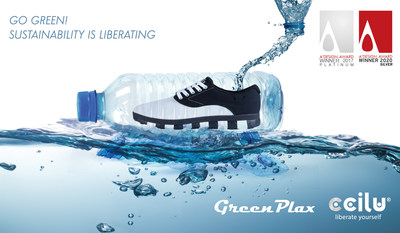 The patented GreenPlax(R) technology brings the feasibilities of building up every major component (upper, insole, and outsole) of the footwear with ocean plastics, it was just honored by A’Design Award & Competition in footwear category of the year 2020. Embodying the brand’s visions of sustainability and circular economy, through the development of the recycling/upcycling ecosystem for footwear industry.

The patented GreenPlax® technology brings the feasibilities of building up every major component (upper, insole, and outsole) of the footwear with ocean plastics to the table, while most of the other leading footwear brands simply use ocean plastics to make fabrics of the shoe uppers. One pair of GreenPlax® Renee sneaker averagely upcycles 15 plastic bottles. To embrace the spirits of entrepreneurship, true innovation, direct-to-consumer (DTC) business model, and deep-rooting the emerging generations, GreenPlax® Renee will be firstly launched at Kickstarter platform (https://www.kickstarter.com/projects/greenplax/greenplax-the-worlds-1st-shoes-made-with-ocean-plastics) with the assistances of Funded Today, then moved to CCILU branded stores worldwide, and brand-owned digital platform www.Ccilu.com. Following the same path of its first green technology "XpreSole®", which upcycles the spent coffee grounds and turns it into footwear, CCILU plans to share GreenPlax® technology with other footwear companies, beverage companies, and any other organizations who are fighting the problems of ocean plastics, to assure an expansive sharing and dissemination of this cutting-edge innovation.

"Every minute of every day, we throw away one million plastic bottles around the world. Only 4% of them are properly recycled. The most of them eventually ends up in the oceans. It takes up to 1,000 years for the bottles to be decomposed. The first plastic bottle was produced in 1947 and in theory it has not been decomposed till now," CCILU Footwear Founder/CEO Wilson Hsu explained. "The toxins from decomposing the bottles leached into the landfills and oceans cause a wide variety of health issues, including reproductive problems and cancers. On average, every week, each of us ingests 5 grams of microplastics from the ocean because the bottles we throw away end up a part of our food chain. That’s like eating one credit card every week," Hsu continued. "The COVID-19 pandemic just gives us a heavy lesson that we’ve been over-riding and over-loading ourselves and our mother earth since the industrial revolution in the 19th century. We have to react immediately and do things completely different. We do not have the plan B."

CCILU’s plan also aims at significantly reducing petroleum consumption and carbon footprint generated from the footwear industry by at least 30%, with replacing the traditionally petro-based footwear material with GreenPlax® which can be used in all major components of the footwear, including upper, insole, and outsole. Most importantly, GreenPlax® technology demonstrates one of the best practices of circular economy: upcycling the pollutant and hazardous ocean plastics and turn it into high-performance footwear material.

1.  Minimize the plastics dumped into the ocean.

2.  Minimize human’s regular ingestion of micro-plastics from the ocean.

How does CCILU transform ocean plastics to be footwear? It all starts with the process of collecting the ocean plastics worldwide. The process of classifying, cleaning, drying, grinding, sifting, and pelleting the ocean plastics, through the patented process, creates a ready-to-export, concentrate masterbatch of either fabric or sole material that is then sent for final product cultivation to factories around the world. CCILU utilizes centralized resources in Taiwan to produce the master batch of GreenPlax® material which can be easily shared with other manufacturers. For CCILU’s own footwear production, the GreenPlax® uppers, insoles, and outsoles undergo extensive physical properties testing to ensure quality before being made into CCILU footwear.

In addition to contributing to alleviating the issues of ocean plastics and bringing back the SKIVE-ON® technology, CCILU’s GreenPlax Renee also showcases a series of attributes of the most versatile sneaker on the planet, including vegan (PETA approved), super lightweight and flexible, water repellent, dirt/oil proof, moisture wicking, fast drying, odor control, great grip, and UV protection.

"The ultimate lightweight and flexibility, the instant comfort, and the increasing sustainability are the three major pillars of CCILU’s brand and product identity. We aim at developing and delivering a series of innovations and build up the milestones one by one in the journey. The XpreSole® tech was the first one and the GreenPlax® tech came after. We will have more initiatives in the next one year or two," Hsu said. "Our ultimate goal in the short term is to design and develop the first ‘carbon-negative’ shoes by the year 2021, and to get the footwear industry and the consumers embrace the concepts and products addressing circular economy and sharing economy," Hsu continued. "It is the embodiment and true realization of our motto, liberate yourself. In fact, the tagline for GreenPlax® conveys the message and intent of the new tech: ocean plastics is recyclable, and sustainability is liberating."

Launched in 2011, the award-winning lifestyle brand is now sold in more than 60 countries, with 40+ CCILU stores in Asia and a permanent presence established in North America, under the CCILU USA Inc. banner. Via its sponsorship of the World of Dance live competition tour, and the partnerships with PGA TOUR, Grand Slam, Swarovski, Warner Brothers, Hang Ten and Hang Ten Gold, CCILU Footwear is expanding its footprint in the North America and worldwide. "CCILU" (CHEE-loo) means "liberate" in Japanese, and "liberate yourself" is the call to action, a reminder that we each have the power to defy limitations. For CCILU, this means bringing our creativity and independent spirit to footwear evolution, thanks to CCILU Footwear’s revolutionary technologies. These have evolved from comfort, fashion and function, to wellness and sustainability. In the year 2019, Ccilu unveiled XpreSole®, a revolutionary technology that upcycles spent coffee grounds to be high-performance footwear material. in 2020, CCILU launched GreenPlax®, another advanced technology that enables every major component of the shoes (upper, insole, and outsole) to be made with ocean plastics.