Episode 5 has flipped through the rom-com side of the drama after Vincenzo’s team burned down Babel’s Pharmaceutical warehouse. Although Babel Company is extremely powerful and the fight won’t be fair, Vincenzo and Cha-young as the legal team are ready to take their fight to court and do whatever it takes even doing an unorthodox approach.

The successful revenge plan of Vincenzo’s team’s last episode revealed the true and main villain behind Babel Company. As the warehouse burned right in front of his eyes, Joon-woo as the real man behind Babel Company got furious and almost choked Chairman Jang to death. He reminds him that he was just his puppet and ordered to convey that the fire was caused by electric failure.

Chairman Jang Han-seo’s character was portrayed by Kwak Dong-Yeon, as the front chairman of Babel. Although his character on the surface seems like a cold-hearted chairman, in front of Jang Joon-woo whom he called “hyung-nim”, he acts like a petrified child.

Guessing from how Joon-woo treated Chairman Jang, I would assume that maybe they are brothers and the ruthless Joon-woo suppress him, or maybe they are not blood-related and Chairman Jang was in debt to him and pays him back by acting as his front. If they are indeed brothers, I’m hoping that Chairman Jang would be able to let him lose himself from his brother as he was being abused. He can also serve as Vincenzo’s breakthrough to defeat the man behind Babel.

Meanwhile, Vincenzo got a chance to meet Chairman Jang, and he senses that he is not the real leader of Babel Company. Vincenzo and Cha-young both concluded that to catch the real boss, they need to destroy the puppet. They worked together to convince the former victims of Babel whose relative’s death was faked as leukemia and are being forced to settle by Attorney So.

Losing the bet to win over the victims, Cha-young accepts her punishment. This is where she got a bit intimate with Vincenzo. She was nervous because Vincenzo was taking a while to decide what her punishment will be. She urged him to hurry up, then suddenly he stepped closer to her and he stares at her face and smiled. Anticipating her punishment, Cha-young’s forehead was lightly tapped by him. This scene showed how Vincenzo was so tender to Cha-young and she cared about her after his previous attempt on forcing her to not fight Babel.

While Vincenzo and Cha-young get intimate, Joon-woo started to level up his plans. Attorney Han called Joon-woo over to his office and appointed him to become their partner. Although Attorney Han was confused and reluctant, he cannot refuse Chairman Jang’s request. After getting appointed, he hurried over to Jipuragi and broke the romantic ambiance of Vincenzo and Cha-young.

Suddenly Joon-woo switches to the tamer side of his character, and he exclaimed how happy he was becoming a partner at Wusang. His character was also funny while he bends on his knee saying to Cha-young, “Can you feel my heartbeat?” like what’s up with him? Does he like Cha-young or this is just his way to get in touch and know their plans? Joon-woo already knows that she was the culprit who burned down Babel warehouse, but still, he goes easy on Cha-young and always convinces her to stop fighting against Babel Company. Maybe he did like Cha-young and tried to protect her, or maybe Joon-woo has a double personality which is terrifying.

Cha-young was able to convince the victims of Babel by providing a recording of Attorney So’s ex who was drunk and rants that he accepted bribes from Wusang. Now as the legal defendants of Babel victims, they came to the courthouse and got off Vincenzo’s badass sports car and strut like a celebrity.

The reporters gathered around them as they made a grand entrance, leaving Wusang aside. The ending scene was very lively and funny; you can also see the good chemistry between the two leads and their aura sets off their rival. 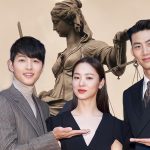 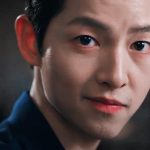