DALLAS, July 21, 2020 /PRNewswire/ — Wingstop Inc. (NASDAQ: WING), the award-winning restaurant brand with more than 1,400 locations worldwide, is hosting Wingstop Wing Day (WSWD) on their rightful holiday, also known as National Chicken Wing Day, this July 29 via a virtual, international festival experience like no other. The brand will give guests five free wings with any online wing purchase made through Wingstop’s website using the code "5FreeWings"1 or with any wing purchase made in-restaurant at participating locations worldwide. 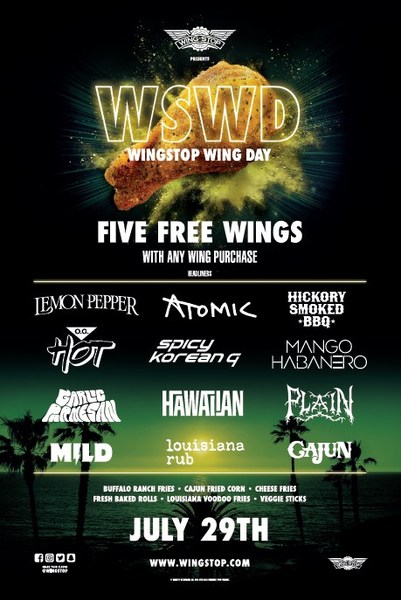 With summer festivals canceled all over the world, Wingstop will revive the music, memories, and vibes of fans’ favorite summer fest with all the passion and flavor people expect from the Wing Experts.

Starting at 12:01 a.m. EDT on July 29, Wingstop will give fans the summer festival experience they crave with a 24-hour international DJ festival livestream, featuring an impressive lineup of DJs curated by DJ Jazzy Jeff. Fans across the world can watch the sets on www.wingstopwingday.com, which will air throughout the day.

"Wingstop is more than a meal, it’s a flavor experience you crave, look forward to and aren’t soon to forget – very similar to that of your favorite festival or concert," said chief marketing officer Christina Clarke. "With many summer plans canceled, we’re launching WSWD, a flavor-filled digital festival to celebrate our fans by providing them with an amazing international DJ lineup and five free wings to fuel their day."

– Jonathan Cruz aka DJ SHORTKUT has a passion for every genre of music. He began his career in San Francisco in 1987 and has competed in World DJ Championship since 1994.

– A British hip-hop producer, Mr. Thing was the winner of the 2000 DMC UK DJ Championship. He is both a DJ and turntablist.

– DJ Puffy is a Barbadian disc jockey and was the 2016 winner of the Red Bull Music 3Style World DJ Championship. He is known for his unique Caribbean-EDM sound.

– DJ Craze is a Nicaraguan American DJ and record producer who plays hip-hop, Miami bass, trap, breaks, dubstep, drum and bass and practices turntablism. He is the only solo DJ in history to claim the DMC World DJ Championship trophy three times consecutively.

– DJ Jazzy Jeff is a DJ, record producer, actor, and comedian. He is a DMC hall of famer for his contributions to the world of hip-hop and DJing, and won two Grammy awards alongside Will Smith for his role in the hip-hop duo DJ Jazzy Jeff and The Fresh Prince.

– DJ Z-Trip was a pioneer of the mashup movement and the 2009 recipient of the "America’s Best DJ Award."

In advance of WSWD, the brand will release a series of crave-worthy Spotify playlists to complement the sensorial experience of eating Wingstop. Fans can listen to curated playlists that embody the 11 distinct Wingstop flavors, all available on www.wingstopwingday.com beginning July 24. For more exclusive VIP perks, join "The Club" to get the latest on all things Wingstop delivered straight to your inbox.

As part of WSWD, for every five free wings redeemed, Wingstop will donate $1 to Wingstop Charities,2 a nonprofit organization that engages youth in the pursuit of their passions by offering competitive grants to local students.

Wingstop Charities
Wingstop Charities is a nonprofit organization that engages youth in the pursuit of their passions by offering competitive grants to local students. Dedicated to serving youth, the organization focuses on four primary pillars – education, arts, sports, and career development – and works closely with Wingstop brand partners and restaurants to amplify and extend the charity’s reach and strengthen our impact in each community we serve.

About Wingstop
Founded in 1994 and headquartered in Dallas, TX, Wingstop Inc. (NASDAQ: WING) operates and franchises over 1,400 locations worldwide. The Wing Experts are dedicated to Serving the World Flavor through an unparalleled guest experience and offering of classic wings, boneless wings and tenders, always cooked to order and hand-sauced-and-tossed in fans’ choice of 11 bold, distinctive flavors. Wingstop’s menu also features signature sides including fresh-cut, seasoned fries and freshly-made ranch and bleu cheese dips.

In 2019, Wingstop’s system-wide sales increased 20.1% year-over-year to $1.5 billion, marking the 16th consecutive year of same store sales growth, and Wingstop achieved over 400% shareholder return since its 2015 initial public offering. With a vision of becoming a Top 10 Global Restaurant Brand, its system is comprised of independent franchisees, or brand partners, who account for more than 98% of Wingstop’s total restaurant count of 1,413 as of March 28, 2020. In February 2019, the Company launched its new tagline and creative campaign "Where Flavor Gets Its Wings" and continued the rollout of national delivery. As of March 28, 2020, Wingstop generated 47% of sales via digital channels including Wingstop.com and the Wingstop app. The Company has been ranked on Franchise Business Review’s "Top 30 Food and Beverage Franchises" (2019), Fast Casual’s "Movers & Shakers" (2019), QSR Magazine’s "The Industry’s 9 Best Franchise Deals" (2019) and "The QSR Top 50" (2019) for limited-service restaurants in the U.S.

For more information visit www.wingstop.com or www.wingstop.com/own-a-wingstop and follow @Wingstop on Twitter and Instagram and at Facebook.com/Wingstop. Learn more about Wingstop’s involvement in its local communities at www.wingstopcharities.org. 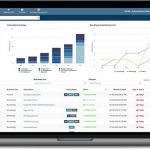