MANILA, Philippines — A woman lands in jail after allegedly cracking a bomb joke at the Baclaran Station of the Light Rail Transit Line 1 (LRT-1) on Wednesday, June 5.

The Pasay Police station identified the woman as Maribeth Florentino, 23, from Sta. Quiteria Caloocan City. She was brought to the police station and was immediately arrested after making a statement about an explosive device.

According to Inquirer News, the arrested woman was having her bag inspected by LRT-1 station security guard Erlinda Unabia, 51, when Maribeth joked that her bag contained a bomb.

Erlinda Unabia, the LRT station security guard immediately held Florentino and later on transferred her to the custody of the Baclaran Police Community Precinct.

Maribeth Florentino was then brought to Pasay General Hospital for a required medical examination before the filing of the appropriate charges. Florentino is facing charges for violating Presidential Decree 1727 also known as the Anti-Bomb Joke Law, which prohibits bomb jokes, among other pranks.

Any person who, by word of mouth or through the use of the mail, telephone, telegraph, printed materials and other instrument or means of communication, willfully makes any threat or maliciously conveys, communicates, transmits, imparts, passes on, or otherwise disseminates false information, knowing the same to be false, concerning an attempt or alleged attempt being made to kill, injure, or intimidate any individual or unlawfully to damage or destroy any building, vehicle, or other real or personal property, by means of explosives, incendiary devices, and other destructive forces of similar nature or characteristics, shall upon conviction be punished with imprisonment of not more than five (5) years, or a fine or not more than forty thousand pesos (P40,000.00) or both at the discretion of the court having jurisdiction over the offense herein defined and penalized.

If found guilty, Florentino will face imprisonment of up to five years and fines of up to P40,000.

Also read: Daughter of a Chinese Tourist Poop on a Public Place in SM Mall of Asia 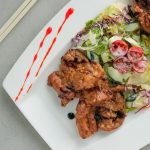